This is an amazing accomplishment when you consider the enrollment at Inez during those years never exceeded more than 110 high school students. Possibly the greatest praise the Indians were given after winning the 1941 State Tournament came from Adolph Rupp, head basketball coach at the University of Kentucky. Rupp was quoted in the Indianapolis Star saying, “that Inez had done more for the advancement of basketball in Kentucky than any other team.”
Those 1940-41 Indians were led by a strong core of seniors – Alex Harmon, Bob Cooper, Charlie Kirk, Billy Taylor and Lester West.Perhaps the best player of the bunch was Lester West. Standing 5’10 and weighing 160 lbs., West, known for his ball-handling and passing skills, was one of the toughest high school players in the state. Dislocating his shoulder in an early January game at Louisville Male he continued to play the rest of the season despite the injury. He played so well in fact that he was named to the “Sweet 16” All-Tournament team for the second consecutive year after helping lead Inez to that state title. 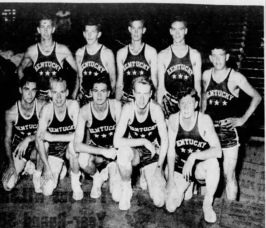 West and the rest of the Inez starting five played so well throughout the season that all five were named to the prestigious Kentucky All-Star team who would take on their counterparts from Indiana in the annual All-Star Game between the two states in the summer of 1941.
Lester West went on to play collegiate basketball at Murray State Teachers College (now Murray State University) in the 1941-1942 season, earning a varsity letter under first year coach Rice Mountjoy. Suiting up for the Racers, West teamed-up with future NBA great Joe Fulks, who was also beginning his first year at Murray as well as another great freshman from Hardin, a former teammate of West on the Kentucky All-Star team, John Padgett. Despite a great regular season, finishing with an 18-2 record, Murray State did not fare as well in the two post-season tournaments they played in that year. The Racers lost to Western Kentucky by two, 46-44, in the first round of the Kentucky Intercollegiate Athletic Conference (KIAC) Tournament and then lost to East Central (OK) State in the first game of the NAIB Tournament in Kansas City by one, 46-45. The disappointing post-season did not discourage Murray State fans from looking forward to next season, even a few sports writers were encouraged with the players returning. The Messenger-Inquirer of Owensboro, KY had this to say about the 1942-43 Racer team in September 1942, “… Murray should have a great team next season with such stars as Captain Hyland Grimmer, Joe Fulks, John Padgett, Leonard “Red” Metcalfe, Herbert Hurley, Lester West and Wid Ellison returning. To inherit a ready-made machine like that is a dream few coaches realize…”
Unfortunately, Lester West would not be a member of the team that next season. World War II had been raging in Europe for three years and in December 1941, the Japanese attacked Pearl Harbor sending the United States to war. Answering the call of duty, Lester West left Murray State and enlisted in the United States Army at Huntington, WV on November 10, 1942. 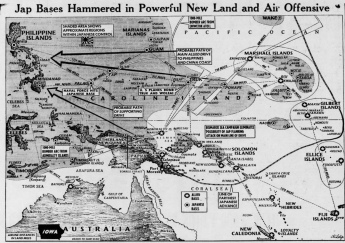 After completing basic training, West was sent to receive additional training as a flight engineer and gunner in the Army Air Corps. After a long and arduous training regimen West was assigned to a crew who would be flying a B-24 Liberator into war. The crew of ten included the pilot, 2nd Lt. Edwin T. Szczypinski; co-pilot 2nd Lt. Robert F. Allgeier; navigator 2nd Lt. Bernard Wienckowski; bombardier 2nd Lt. Elmer Pahl; Lester West, recently promoted to Sergeant, was the flight engineer; his assistant engineer was Sergeant Ernest Szydlowski; the radio operator was Sergeant Carl Swift; the final three crew members were all assigned as gunners, Sergeants John Refy, Edward Westpfahl and Harvey Hitt.
In late January 1944, the flight crew, now known as Training Crew 18, were assigned to the 42nd Bomb Squadron in Hawaii for six weeks of additional training. In Hawaii the crew performed three weeks of flight training before finishing with three weeks of ground school training. Flight training included gunnery, formation flying, strange field landings, bombing, navigation and search missions. It was then on to ground school that included lectures on water landing procedures, radar communications, photo interpretation, ordnance, aircraft and sea craft recognition and identification as well as a course on the general geography of the Central Pacific. Even while the crew was being trained on the ground, they were expected to fly every day. Military officials hoped that this type of training would prepare the crew for the missions they were about to fly against the Japanese and expose them to any situations they may face, including flying over the wide expanse of the Pacific.
On March 29, 1944, with training complete, West and the rest of his B-24 crew were assigned to the 26th Bomb Squadron, 11th Bomb Group of the 7th Army Air Force operating out of Eniwetok Atoll. At that time, the 26th was regularly bombing Japanese held Truk Atoll. Considered the most formidable of all Japanese strongholds, Truk was Japan’s main naval base in the South Pacific.