By Troy Howell
For Bluegrass Basketball

Frederick Douglass edges Dunbar to advance to first ever region FinalThe Frederick Douglass Broncos are in the 11th region finals for the first time in the school’s young history after defeating Dunbar 56-55 at EKU. They withstood a furious Bulldog rally in order to do so. 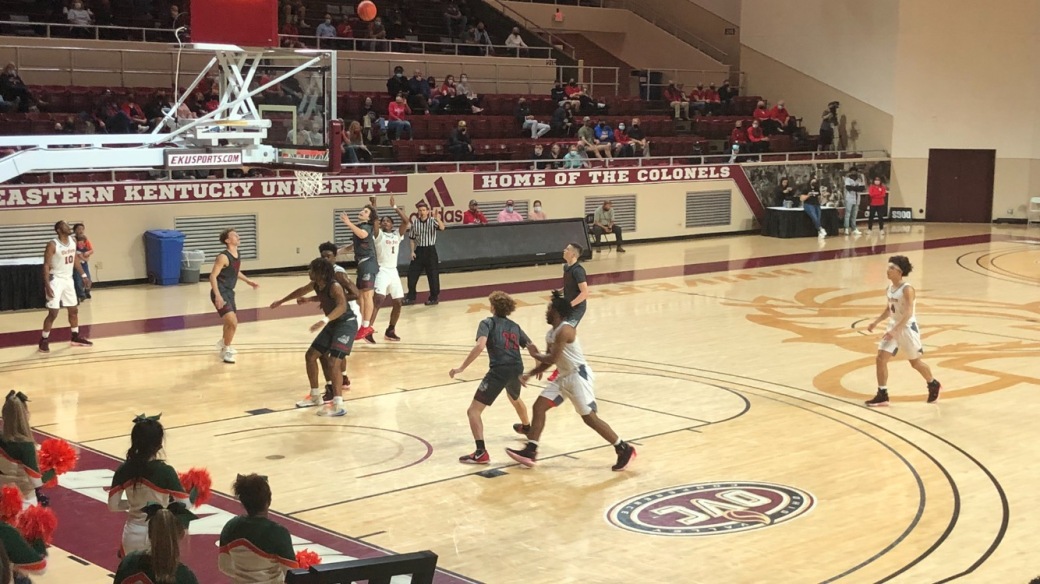 The Broncos were able to build an 32-24 halftime lead with Dunbar’s star player on the bench in the first half with two fouls. Dashawn Jackson, an EKU commit, caught fire for Douglass in the 3rd quarter to help them build a double-digit lead. He looked right at home playing in his future gym, posting 24 points, 4 assists and 2 steals. But Dunbar got back in the game thanks to forcing several turnovers. A Max VanDyke 3-pointer, Tim Hall dunk, Nick Spalding bucket, and Hall layup helped them get back in striking distance.

Dunbar, who trailed most of the game, had a chance to take the lead with but lost the ball with 52 seconds left after the Broncos forced a jump ball and claimed the possession arrow. Jackson cashed in a layup a few seconds later to push the lead to 56-53.

After a pair of Hall free throws cut the Broncos’ lead to 1 with 35 seconds remaining, Frederick Douglass played keep away until Dunbar fouled them with 16 seconds remaining, but the Bulldogs still had a foul to give. They were finally able to put Douglass on the line with only six tickets remaining.

Frederick Douglass was able to run lots of time off the clock before Dunbar finally put them on the line with six seconds left. ⁦@Dashawn1_⁩ ⁦@BluegrassBball⁩ ⁦@FDHSBoysHoops⁩ pic.twitter.com/nlVqHxNPii

The Broncos missed the front end of the bonus, but were able to contest the rebound and burned off valuable time until Dunbar was finally able to call a timeout with only 2.7 seconds remaining. It was too little, too late. Having to go the length of the court, the Bulldogs desperation heave from beyond half court fell harmlessly to the ground.

#8 Frederick Douglass 56 #10 Dunbar 55 – Final – The Bulldogs comeback bid falls just short. ⁦@FDHSBoysHoops⁩ is one win away from their first ever trip to the Sweet 16. They avenged their only loss of the season tonight. ⁦@BluegrassBball⁩ ⁦@KySportsRadio⁩ pic.twitter.com/qkbL8UWlfQ

For Douglass, Kai Simpson finished with 13 points while Tyson Barrett added 11 points including a highlight slam. He was 5-of-8 from the field. Tim Hall lead Dunbar with 15 points and 12 boards. Nick Spalding added 11.

The future is bright for the #10 ranked Bulldogs. They lose no seniors from a team that defeated Lexington Catholic twice. The Knights held the top state ranking for most of the season. Hall and Spalding will be two of the top ranked players in the 11th region next season.

It was an exciting night for Douglass, who avenged their only loss of the season, a 75-68 loss to Dunbar on January 12. The Broncos, currently ranked #8 in the state, have now won 17 straight games. They play in the region finals on Saturday at 5:30 at EKU. They will face Madison Central, who defeated Franklin County 67-51.