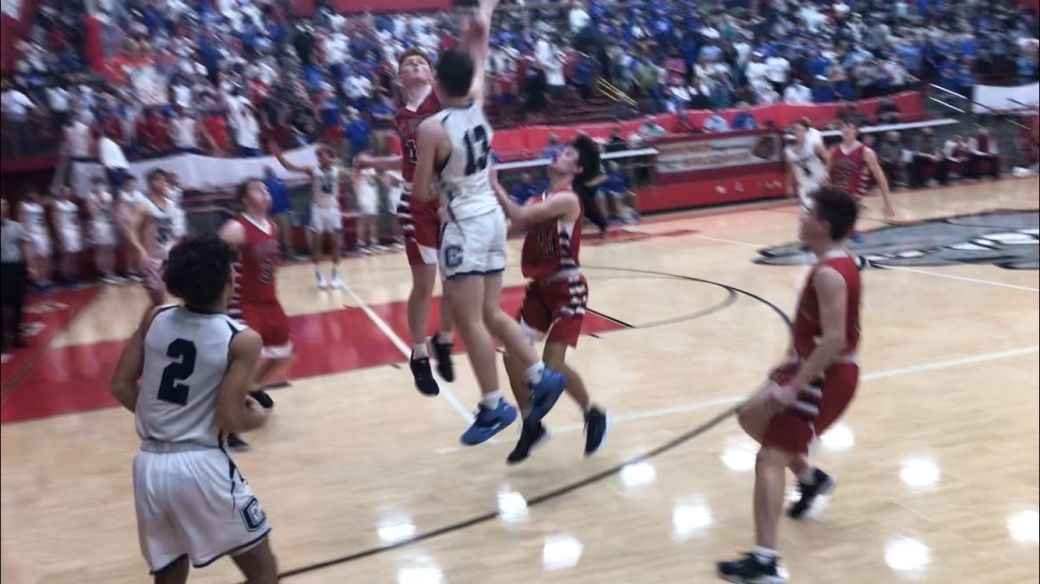 By: Troy Howell
For Bluegrass Basketball

“Where is St. Henry?”
That’s a question I got a lot this year on twitter when people saw the Crusaders were ranked so high. Even though they won the All “A” State Championship in 2020 and 2021, many people didn’t seem to know much about the school.

I’ll tell you where St. Henry is.

They are in the 9th region semifinals.

Wyatt Vieth saw to that.

Vieth, the team’s senior leader came out of nowhere to block Evan Ipsaro’s shot at the buzzer to give St. Henry a 61-60 over #1 Covington Catholic in the first round of the 9th region tournament. Everyone in the gym knew the ball was going to Ipsaro. The Covington Catholic sophomore had scored 32 points and was red hot in the 2nd half.

“We knew it was coming to (Ipsaro) and I just saw him coming across the lane and I knew he was going to pull up, so I just tried to make a good contest and I ended up tipping the ball,” Vieth said. “It ended up being good for us.”

Despite having beaten Covington Catholic by one point earlier this year and breaking the Colonels’ 27-game win streak against 9th region teams, only 30% of people on a recent twitter poll picked the #4 ranked Crusaders to knock off #1 Covington Catholic. The Colonels had won 3 straight 9th region tournaments and most people expected them to do it again.

The game was exciting from start to finish. St. Henry raced out to a 16-8 lead behind a great start from big man Cody Teten. Teten scored six early points and helped negate Covington Catholic’s height and muscle advantage inside. The Colonels rallied behind the shooting of Ipsaro and the inside play of Mitchell Rylee to pull within one point at halftime.

St. Henry opened up an eight point third quarter lead before Ipsaro heated up to put the Colonels up by five.

St. Henry responded with a Cody Teten layup to go up 61-60 with five seconds left.

After a couple of timeouts, Ipsaro raced down the court but found himself surrounded by Crusaders. That’s when Vieth made the block at the buzzer to preserve the victory. Vieth was down on the court for about a minute before getting up and walking to the crowd to celebrate.

Covington Catholic’s loud and well-known student section, the Colonel Crazies, were out in full force, and both teams had good, loud crowds. Vieth said the Crusaders fed off the great atmosphere.

“It’s incredible having all those fans there,” Vieth said. “I love the Colonel Crazies; I know they are a big thing in Kentucky basketball. I love the atmosphere. It was awesome. When they are barking at us, I eat it up. We all love it. It just makes us play better, honestly. We came together and got the win.”

Teten finished with 16 points and eight rebounds. He was 8-for-13 from the field. Vieth added 15 points, four rebounds, four assists, two steals, and two blocks in the full 32 minutes. Ipsaro led all scorers with 32 points on 12-of-18 shooting.

The Colonels season ends at 24-4. They have a very bright future, losing only 1 senior starter. Ipsaro, a sophomore, will return along with Mitchell Rylee, Chandler Starks and several other key players. Two of their three in-state losses were to St. Henry, both by identical 61-60 scores and both decided on the last play. Vieth’s old fashioned 3-point play with one second left was the difference in the first game.

Here’s the and 1 bucket with 1 second left by ⁦@WyattVieth⁩ that led to the 61-60 St. Henry win over Covington Catholic ⁦@StHenrySports⁩ pic.twitter.com/Ipn7Hyl6se

For St. Henry, it doesn’t get any easier. They play #6 Highlands on Wednesday at 6:00 P.M. at Covington Holmes. Highlands knocked off Ryle 104-62 in the first round. #18 Dixie Heights and #25 Conner will meet in the other semifinal.