Collins and Owensboro went head to head as the opener of The Greatest Show in Sports. Collins started out strong but Owensboro was more consistent. The Titans fell to the Red Devils 55-38. Click here for box scores from Game 1, Session 1.

Game 2 of session 1, which could have went to either team — a great matchup and projected to be the most exciting game of the first round — resulted in a mostly one-sided victory for Hoptown, who led for 27:39 of the game; Taylor County only lead for 3:19. The Cardinals seemed to give their best shot but fell short in the Tigers’ 76-64 victory. Click here for box scores from Game 2, Session 1.

The 1st game of session 2, game-wise, was a snooze-fest in Covington Catholic’s blowout over Campbell County. We expected a much larger fight from the Camels; they were our predicted winner of this game. CovCath’s players proved us wrong and defeated Campbell Co 64-43. Oh, if you were wondering… CovCath’s student section? They still got it. Click here for a box score.

Game 2 was my personal favorite. Underdog Williamsburg High School came out firing on all cylinders. They began the first minutes of the game on a 13-0 run and kept the lead for over 24 minutes of the game. Williamsburg’s Yellow Jackets put up a huge battle against Louisville’s Doss… but in this story, Goliath defeated David in the end and WHS fell 56-50. Congratulations to Williamsburg on a monumental season — their first return to the Sweet 16 since 1946. I look for this team, under coach Patrick Robinson, to continue to make some noise out of the mountains. Doss is a Sweet 16 veteran and tonight it showed. See the box scores here.

Here’s the updated bracket for tonight: 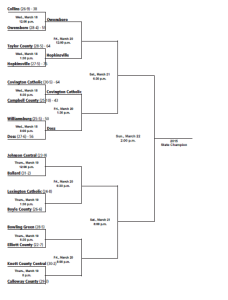